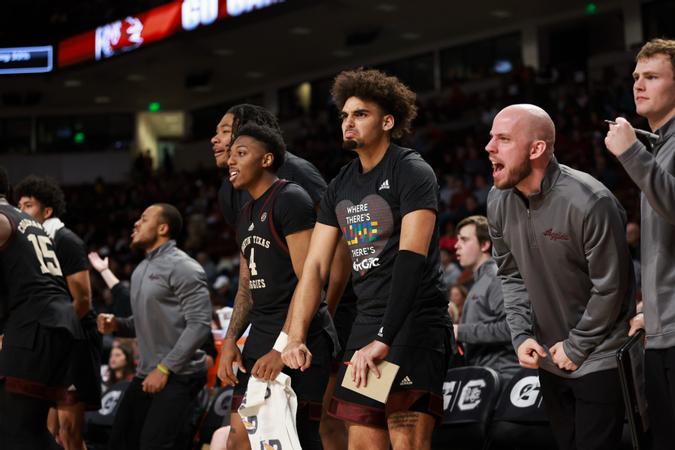 The Aggies won their sixth straight game while improving to 4-0 in Southeastern Conference play for a second straight year and setting a variety of scoring and margin of victories records.

The 41-point winning margin was most ever against a SEC foe, eclipsing a 34-point margin of victory in a 79-45 road win over Georgia on Jan. 16, 2016. It was the second-largest margin of victory against any conference opponent, only behind 44-point margins against Texas Tech in 2007-08 and Texas in 1958-59. The 94 points were the most vs. a SEC opponent, eclipsing the 91-point effort vs. the Georgia Bulldogs last season.


Texas A&M led from wire to wire as the defense was relentless and the offense came out hot and never really cooled off. The Aggies allowed just 18 points in the first half while approaching their season high with 50 points before the break. It was the fewest first-half points in 2022-23 (previous low was 22 points by Loyola Chicago) was the lowest against a SEC opponent since Missouri scored 18 points in the first half in 2020

The Aggies hit 54.8% from the field, which was a season high, and team had another hot strong outing from the 3-point line (9-of-20). Defensively, the Aggies limited South Carolina to 29.2% from the field in the first half and just 38.0% for the game. The Aggies reeled in a season-high 48 rebounds while having a massive 32-rebound advantage over the Gamecocks.

Five Aggies posted double-digit points with sophomore Wade Taylor IV leading the way with 20 points, as he hit 8-of-10 shots, including 4-of-6 from the arc. Other Aggies in double figures were Julius Marble with 14, Dexter Dennis with 13 and Henry Coleman II and KK Robinson with 12. Coleman III pulled down a game-high 11 rebounds for his second straight double-double and third of the season.

On what the team has done well defensively lately…

“I think our staff has done a really good job in the first two weeks of SEC play of taking the core of what we do defensively and then what’s specific to the opponent. What tweaks do we need to make? Devin Johnson is our defensive coordinator and he’s been superb in those adjustments. I also think our guys should get some credit because those adjustments in real time, when it’s not the core of what you do, in order to win in this league, you have to be on point. I think our guys have been able to be consistent in their practice reps and those adjustments and those reps combined have really helped.”

Eileen Gu: Sport and fashion aren’t so different for the Chinese-American skier and model

‘Poker Face’ Is Your Next Rian Johnson Fashion Obsession

Rian Johnson continues to give us great content in the murder mystery genre. From Benoit Blanc in the Knives Out franchise to...
Read more

US issues travel advisory for Cancun after disputes between Uber, taxi drivers

DETROIT (WXYZ) — A travel advisory has been issued for one of Mexico's most popular vacation spots.Cancun is now on the U.S. State...
Read more
Load more