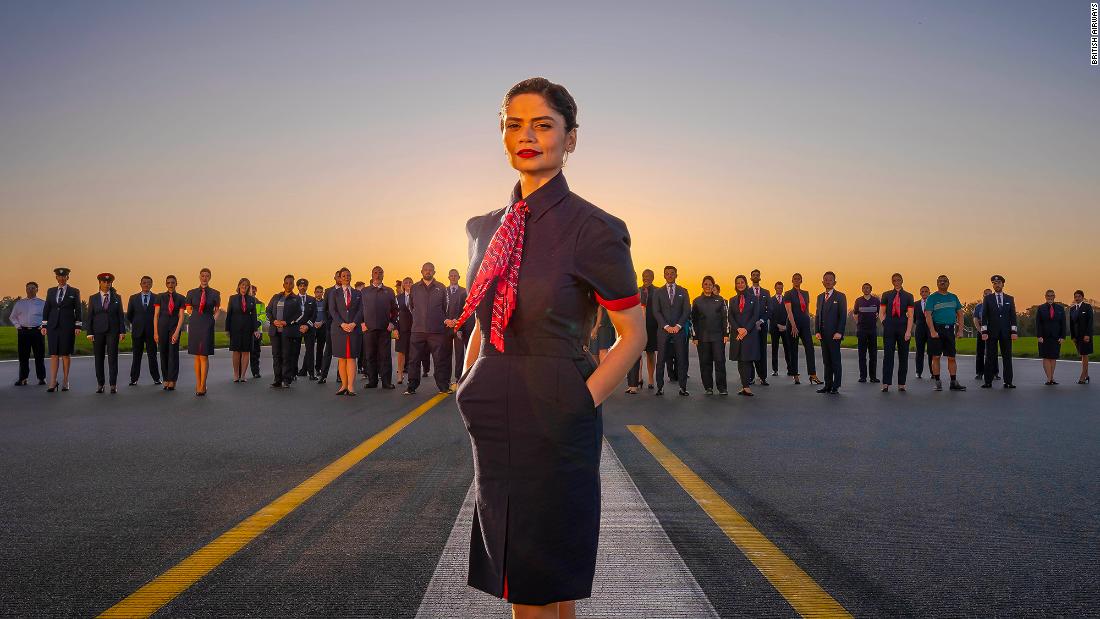 Editor’s Note — Sign up for Unlocking the World, CNN Travel’s weekly newsletter. Get news about destinations opening, inspiration for future adventures, plus the latest in aviation, food and drink, where to stay and other travel developments.

(CNN) — Some people say flying just isn’t glamorous enough. And as airlines battle to cast themselves as the sleekest team in the skies, another brand has heard that complaint.

British Airways has unveiled a new uniform — its first in nearly two decades. The airline’s current threads, designed by Julien MacDonald, will be replaced by a line created by Ozwald Boateng, the Savile Row designer and tailor.

Engineers and ground operations staff will get their new uniforms in Spring 2023, while onboard crew and check-in agents will receive theirs in the summer.

And to keep things relatively green — at least, for an airline — staff will hand in their old uniform for recycling or charity donation when they pick up the new. Around 90% of the material is a fabric mix using recycled polyester.

The path to new uniforms has been a lengthy one, starting in 2018 and involving over 1,500 staff, who took part in design workshops and garment trials.

Boateng shadowed staff to get an idea of their movements and requirements before designing the line, while for the past six months, crew have worn the uniform in “secret trials” on cargo flights, while maintenance staff have worn them out of sight at the UK’s Manchester and Cotswold Airports, according to a press release.

Those trials have actually produced changes, too — engineers requested (and got) easy-access tool pockets, while ground handlers asked for gloves with fabric that would enable them to use their devices while wearing them. Crew had their apron pockets widened after reporting in trials that they needed more space during meal service.

As for the uniforms themselves, the airline says the Boateng has created “bespoke fabrics and designs.” An “airwave” pattern, inspired by air flowing across an airplane wing, features on jackets, t-shirts, buttons and ties, while a jacquard fabric used for tailored items incorporates the “speedmarque” — BA’s logo-like ‘swish’ painted on planes.

Boateng worked for four years on the uniforms.

The collection has a tailored three-piece suit for men, who can choose between regular or slim fit pants. Women can choose between pants, skirt, dress or — a first for an airline — a jumpsuit. There is also a tunic and hijab option. Of course, the uniforms aren’t quite up to Savile Row specifications — they are “high-quality, resilient fabrics that are easy to care for.” The outdoor uniforms have even been put into freezers and into the shower to test their fit for extreme weather.

Boateng said in a statement: “Designing this uniform was a vast and painstaking undertaking and it went far beyond clothes. It was about creating an energetic shift internally.

Over 1,500 members of staff helped trial the uniforms.

“One of my main objectives was to create something that spoke to, and for, the airline’s colleagues. Something that inspired and empowered them, encouraged them to conduct their roles with pride and most importantly to ensure that they felt seen and heard. Although the airline has a strong heritage, it was imperative to support in creating a fresh narrative of change and transcendence, while remaining timeliness.”

Let’s hope that works for the beleaguered airline. BA has yet to fully recover from the pandemic, during which it laid of swathes of staff. 2022 saw multiple IT meltdowns, baggage delays and canceled flights for the airline, which was at the heart of the UK’s travel chaos in summer 2022.