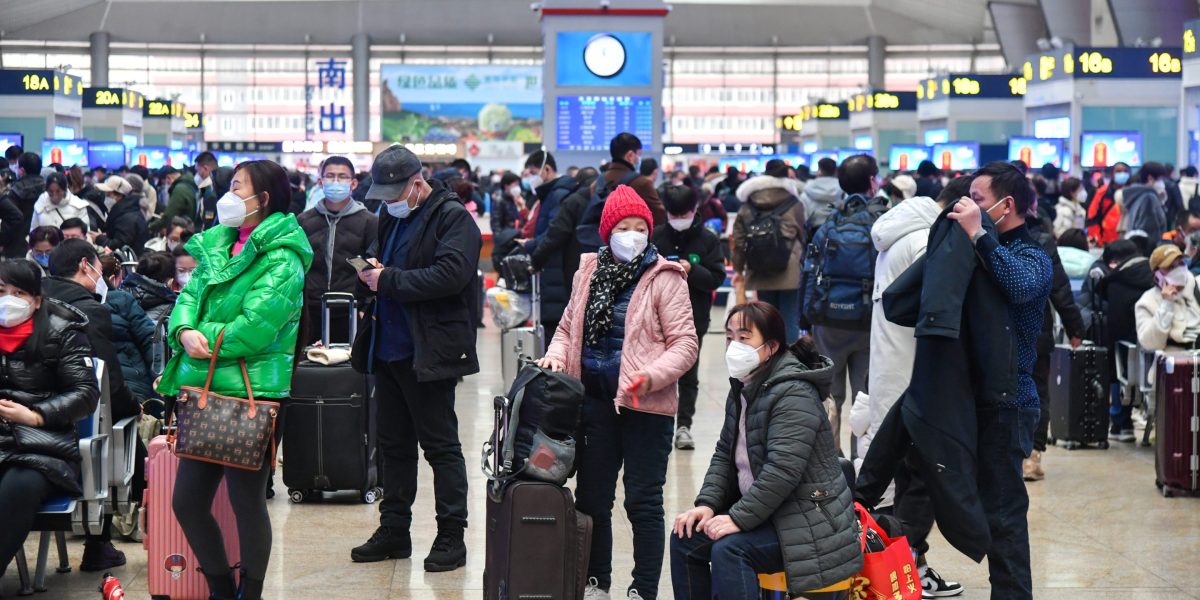 It’s an agonizing decision for hundreds of millions of migrant workers and students, who may have hoped to reunite with family during the Chinese New Year (also known as Lunar New Year or Spring Festival), the first in mainland China without any COVID restrictions since the pandemic began.

Elderly people in rural communities “may be infected during Spring Festival when they meet relatives and friends,” Liang Wannian, who heads the country’s COVID-19 response team, told state broadcaster CCTV on Monday.

Guo Jianwen, a member of China’s pandemic prevention team, suggested on Thursday that if Chinese people were worried about infecting their elderly relatives, “don’t go home to visit them.” He said, “You have all kinds of ways to show you care for them, you don’t necessarily need to bring the virus to their home.”

The question of whether to return home for Chinese New Year was a popular topic on Chinese social media, with Reuters reporting the question was the most-read item on Weiboa Twitter-like social media platform, on Thursday.

One popular response on social media called Guo’s suggestion to stay home “one of the few useful suggestions put forward during this period,” according to The Guardian. The post reflects public frustration with the rapidly changing medical advice doled out by China’s health experts.

What happens during Chinese New Year?

Much of China’s urban labor force is made up of migrants from China’s rural heartland, and many return home to see family for the Chinese New Year holiday. Students studying in the country’s universities also return home for the holidays.

China expects over 2 billion trips over the “Chunyan” period, a 40-day stretch of holiday travel. The period started Jan. 7 and runs through to Feb. 15.

Chinese New Year was once the world’s largest movement of people, with 3 billion trips made by passengers traveling back and forth in 2019, before the pandemic. (By comparison, the American Automobile Association estimated that over 55 million Americans made trips over the Thanksgiving holiday period in 2019.)

Yet during the pandemic, internal mobility restrictions made it difficult for some people to make Chinese New Year trips. Those considering trips feared that snap lockdowns could stop them from returning to their workplace or school, and so they opted to stay put.

How many COVID cases does China have?

Yet it may be too late for health officials’ advice to ward off further COVID infections. China’s COVID outbreak is already spreading to rural communitieseven as the outbreak may be peaking in major cities.

China is experiencing a surge in cases beyond anything the country has seen so far. China’s official case and death numbers—503,302 and 5,272, respectively—under-represent the scope of the outbreak since Beijing changed how it records COVID cases and deaths last month. Health officials have, at times, suggested that daily case counts are stretching into the tens of millions. Earlier this week, an official in Henan estimated that 90% of local residents had now caught COVID, which would put the province’s case count alone close to 90 million.

Airfinity, a U.K.-based health research firm, forecasts that over 3.5 million people are catching COVID each day, and over 20,700 people are dying of the disease daily. The company projects the outbreak to peak on Jan. 13.

China’s health care system is already stretched by the outbreak, with hospital space and medicine running low. There are even fewer resources in China’s countryside, with rural communities having less than half as many doctors and nurses as cities, according to the South China Morning Post. Villages have also run low on fever and cough medication, forcing communities to appeal for donations over the internet, according to the SCMP.

Beijing on Sunday ordered villages to stockpile at least two weeks’ worth of medicine, and set up teams of volunteer drivers to carry people to treatment centers, according to state-run paper Global Times.

To make matters worse, China has relatively low rates of vaccination among its elderly population. In early December, health officials estimated that only 40% of the country’s over-80 population had gotten the booster shot needed to protect against newer COVID variants. Outside health experts argue that China also needs to import more effective mRNA vaccines rather than rely on less-effective homegrown versions.

The World Health Organization said it was ready to work with China to handle the wave of people traveling home for the holidays, but officials said they needed more data. “There are some very important information gaps that we are working with China to fill,” Maria Van Kerkove, the WHO’s COVID technical lead, told reporters on Wednesday. The WHO has accused China of minimizing the scope of its outbreak, particularly with regard to hospitalizations and deaths.

Learn how to navigate and strengthen trust in your business with The Trust Factor, a weekly newsletter examining what leaders need to succeed. Sign up here.

Can you tell if your gas stove is hurting your health?

(NEXSTAR) – The debate over whether or not to ban gas stoves may have started as an environmental issue — and then became...
Read more
Health

Mental health advocates in the Adirondacks look to fix gaps

February is coming and with that means we...
Read more