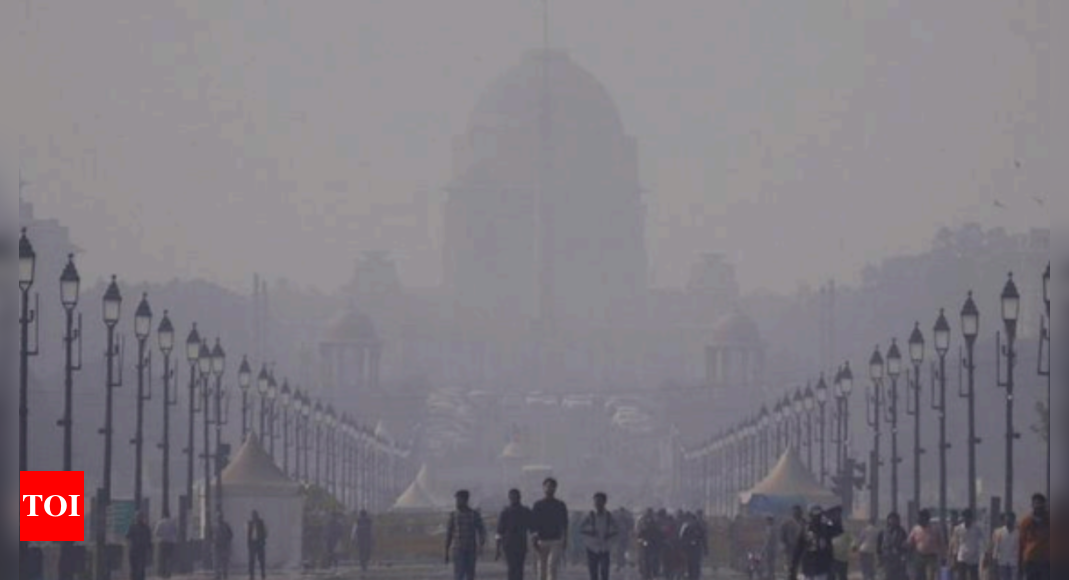 NEW DELHI: Delhi has earned the dubious tag of being India’s most polluted city, rising from rank 3 in 2019 and rank 2 last year in the worst-polluted list, as per the National Clean Air Programme (NCAP) Tracker based on annual PM2.5 levels measured by the Central Pollution Control Board.
While Delhi’s annual PM2.5 levels improved by 7.4% since 2019, from 108 microgram per cubic metre to 99.7, Ghaziabad and Noida, the two cities above the capital in the 2019 list, recorded sharper improvements of 22.2% and 29.8%, respectively.
The Centre had launched NCAP in 2019, setting a target of reducing key air pollutants PM10 and PM2.5 by 20-30% by 2024 in 131 “non-attainment” cities — urban centres that fail to meet the national ambient air quality standards. In September 2022, the Centre set a revised target of a 40% reduction in particulate matter concentration in cities covered under NCAP by 2026. To meet these targets, around Rs 6,897.06 crores have been released to the cities under the programme and by the finance commission.

The annual average safe limit for PM2.5 is 40 micrograms/cubic metre.
The 2022 data was released on NCAP’s fourth anniversary and is available as the NCAP Tracker, run by Climate Trends and Respirer Living Sciences.
In terms of PM10 pollution, Delhi ranks third in India after Ghaziabad and Faridabad. The capital’s annual PM10, recorded at 213 micrograms/ cubic metre in 2022, has improved only marginally by 1.8% since 2017. Average PM10 levels improved by 10.3% in Ghaziabad and 2.3% in Noida. The national safe level for PM10 is 60 micrograms/cubic metre.
Aarti Khosladirector, Climate Trends said, “While the CPCB has already issued stricter reduction targets for the non-attainment cities, we are just a year away from 2024, the original target for NCAP. Many cities are still far from reaching their reduction targets and may be unable to do so without aggressive plans and stringent measures.”
According to the report, most cities in the top 10 most polluted list of 2022 are in the Indo-Gangetic Plain, demonstrating that real and long-term solutions lie in an airshed approach for better air pollution management in the entire region. It also reiterated the need to check pollution at source to obtain maximum benefits from mitigation efforts.

Ronak Sutariafounder and CEO, Respirer Living Sciences said, “For the more harmful PM2.5 pollutants, which tend to have different sources than PM10, the improvements have been marginal at best. This shows that much work is needed to reduce the finer sources of pollutants.”
Sunil Dahiyaanalyst, Centre for Research on Energy and Clean Air (CREA), said, “The country is making progress towards resolving the air pollution crisis but the severity of the situation demands more urgent, efficient and systematic solutions. India needs to move to a sectoral emission load reduction-based approach for air quality management as it is only the reduction in consumption of polluting fuels and efficient pollution control at the source that will improve air quality in the long run.”
However, Sachchida N Tripathi from the civil engineering department at IIT Kanpur and a member of the NCAP steering committee, said, “As cities have shown improvement in levels of particulate matter, it means we are on the right track. We need effective implementation of the action plan.”
Watch AQI worsens in Delhi, older vehicles temporarily banned in city