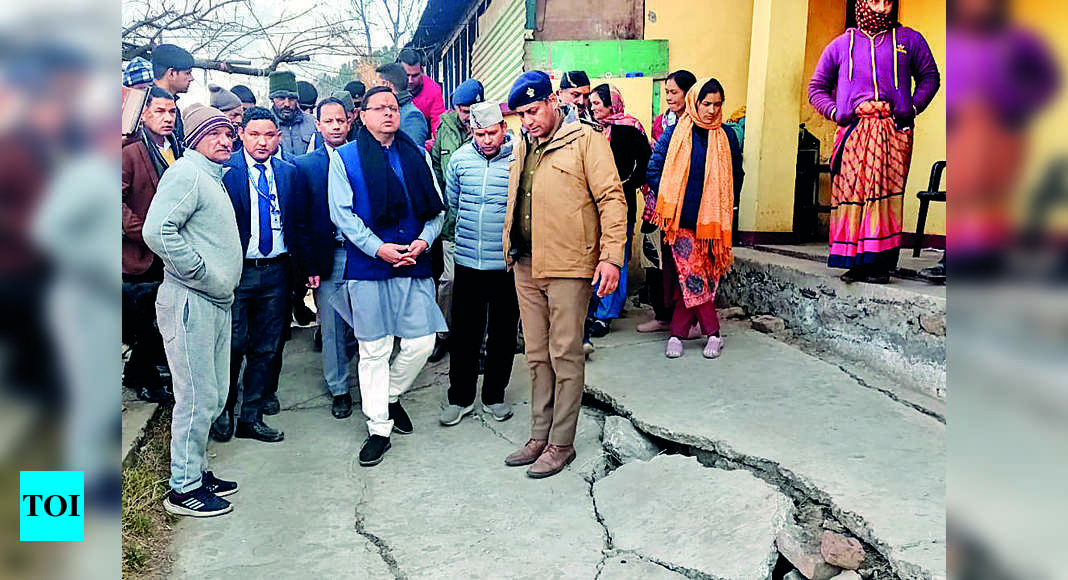 DEHRADUN: An eight-member expert panel has recommended that “houses in Joshimath with maximum damage should be demolished, areas which have become inhabitable must be identified and relocation of the people at risk should be done as an immediate measure”.
The panel was led by Ranjit Sinhasecretary of the disaster management department. It conducted a field survey of Joshimath on January 5-6,
A senior official, privy to the report submitted both to the Centre and state government, told TOI on Saturday: “Prima facie, it appears that at least 25% area of Joshimath, which has a population of about 25,000, has been affected by the land-subsidence problem. A survey to ascertain the intensity of damage (to buildings and sundry structures) is currently underway. It will be put in three categories: severe, moderate and slight.”

The expert team, which was urgently tasked to assess the damage to buildings and extent of ground subsidence (sinkage) in Joshimath, visited the affected areas during its two-day survey and finalised its report on Saturday, a copy of which is with TOI. It has observed “aggravated damages” in Sunil, Manohar Bagh, Singhdhar and Marwari areas, as compared to the last field survey just some months ago in August 2022.
The team also visited Jaypee Colony where an aquifer had burst on the night of January 2 with major turbid water flow of roughly 400 lpm (litre per minute). It has observed an “increased land-subsidence with the burst of the aquifer”. The report said: “The gushing of water flow and the appearance of aggravated cracks coincide.”
It added: “The burst of water flow, which was traced from Jaypee Colony to Marwariprobably created some underground void space (sic), which has resulted in sinking and subsidence at different spots above and below Jaypee Colony, causing many large cracks — some even a metre deep…Due to this, the retaining walls and foundations of buildings have failed, contributing to cracks in the buildings and on the ground… Yet, the water source is not ascertained. Samples have been collected to determine its source.”

The team went to the Tapovan-Vishnugad hydropower project site of NTPC as well. “Toe erosion” by the Alaknanda river was observed in Vishnuprayag and the team suggested building a “protection wall” at the toe of the left bank between Vishnuprayag and Marwari.
More detailed studies have been suggested, including fresh geo-technical, geophysical and hydrological investigations along with seismic and slope movement monitoring.
Meanwhile, the number of affected structures — residential, commercial and even temples — which have developed large cracks has increased from 561 to 603 within a span of a mere 48 hours. The holy town has been facing massive land-subsidence, aggravated significantly in the past few days.

A temple in Joshimath collapsed on Friday evening. No one was injured in the incident as the temple was abandoned. Fresh cracks have been reported in Shankaracharya Madhavashram temple too.
As of now, 55 families have been shifted out of their houses. District disaster management officer, Nand Kishore Joshi, said, “Identification of the affected areas and houses are in process and people living in vulnerable houses are being shifted to safer places.”
Chief minister Pushkar Singh Dhami had on Friday ordered immediate evacuation of around 600 families living in houses that have developed large cracks and are at risk.