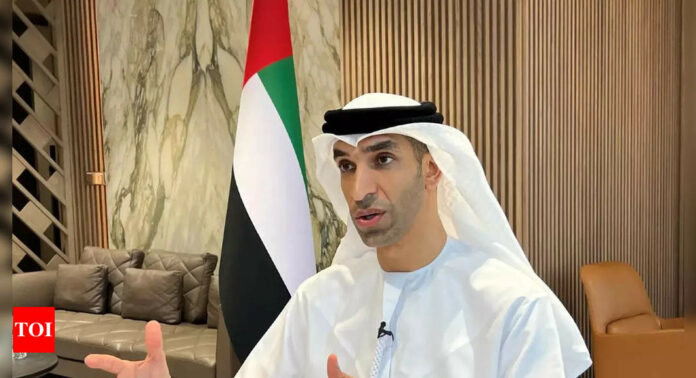 The United Arab Emirates (UAE) and India are discussing ways to boost non-oil trade in rupees as the Gulf country looks to strengthen ties with a major trade partner and boost its economy.
“We are still in early-stage discussions with India on this dirham-rupee trade,” Thani Al-Zeyoudi, the UAE’s minister of state for foreign trade, said during a Bloomberg TV interview in Davos, Switzerland, on Friday. “This is only going to be focusing on non-oil trade.”
Oil trade in the Indian currency is “not under consideration,” he said.
The minister’s statement echoes that of neighboring Saudi Arabia. Earlier this week, Saudi finance minister Mohammed Al-Jadaan said the kingdom is open to discussions about trade in currencies other than the US dollar.
The UAE has been seeking to step up trade with crucial partners and last year signed multiple economic pacts with countries including India, Indonesia, Turkey, Israel and Ukraine. In the coming months, the UAE expects to finalize similar agreements with Cambodia and Georgia, Al-Zeyoudi said.
India was the UAE’s second-largest trade partner in 2021, with bilateral trade of nearly $64 billion, according to data compiled by Bloomberg.
One area UAE is looking to expand is cryptocurrencies, Al-Zeyoudi said.
“Crypto will play a major role for UAE trade going forward. The most important thing is that we ensure global governance when it comes to cryptocurrencies and crypto companies,” he said at Davos. “We started attracting some of the companies to the country with the aim that we’ll build together the right governance and legal system, which are needed.”
Discussions with China are also taking place, according to the minister.
“China is our first trade partner,” he said. “For sure, more is going to be good for consumers, for workers, for people, for businesses.”
The economic agreements are set to boost the UAE’s gross domestic product by 3.4% to 3.8% by 2030, he said.
Bullish outlook
The UAE and neighboring Gulf countries are expected to be sheltered from a looming global recession this year, mainly due to massive oil bounties they collected in 2022 and also due to measures they have taken since the Covid-19 pandemic.
Dubai, part of the seven sheikhdoms comprising the UAE, has seen an influx of businesses, entrepreneurs and tourists over the past couple of years.
The UAE is “very immune,” to prospects of a global recession this year, Al-Zeyoudi said, “we did excellently last year, and we’re going to have an excellent performance this year as well.”