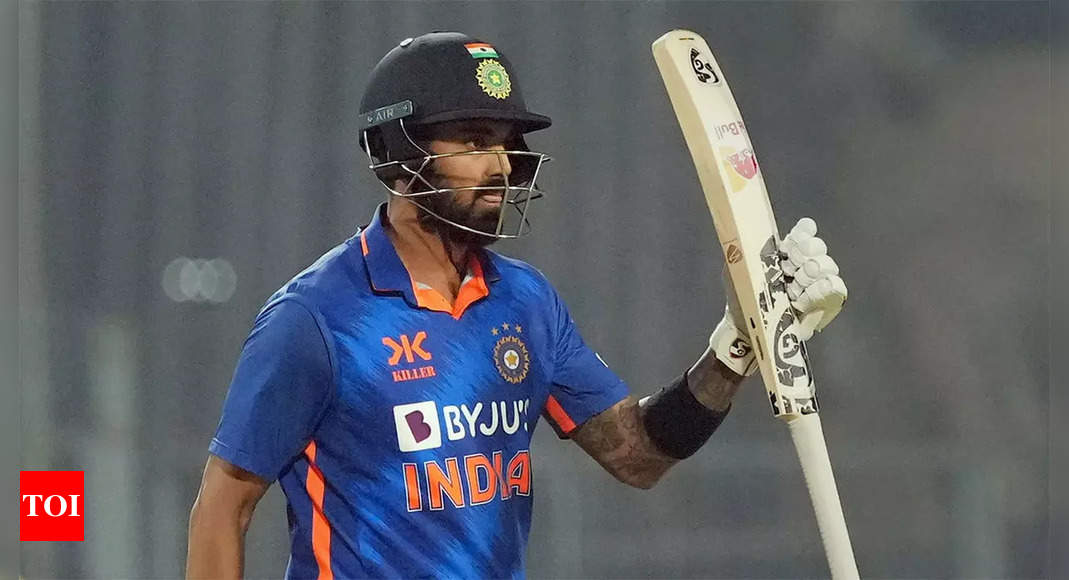 NEW DELHI: Showing some glimpses of form with a gritty unbeaten 64, KL Rahul anchored India to a hard-earned four-wicket win over Sri Lanka in the second ODI at the Eden Garden is Kolkata on Thursday. The win gave India an unassailable 2-0 series lead going into the Thiruvananthapuram ODI on Sunday.
Under-fire Rahul, whose form and place in the XI has been in question for a while, batted with courage and discipline as he forged a crucial 75-run partnership for the fifth wicket with Hardik Pandya (36) after the top-order crumbled in the modest 216 chase.

A victory by 4️⃣ wickets for #TeamIndia in the second #INDvSL ODI here in Kolkata and the series is sealed 2️⃣-0️⃣… https://t.co/IOlafiJwwW

With top-four batters gone for just 86 runs in 14.2 overs, the Rahul-Hardik partnership pulled India out of the troubled waters. Shouldering the responsibility which has been expected from him, Rahul batted till the very end to take India home in the 44th over.

.@klrahul scored an unbeaten half-century in the chase when the going got tough and he becomes #TeamIndia’s Top Per… https://t.co/QsA0hFyF25

Snubbed time and again by Indian think-tank, Kuldeep Yadav proved his mettle yet another time as he formed a lovely bowling alliance with pacer Mohammed Siraj to demolish Sri Lanka for 215 inside 40 overs after they opted to bat.

For his impressive performance with the ball, @imkuldeep18 gets the Player of the Match award as #TeamIndia registe… https://t.co/JkdZElpeR4

The 216 target initially looked a cakewalk but that did’t turned out to be the case. But Rahul’s gutsy knock ensured that the the chase never went out of India’s hands.
Needing 130 from 214 balls, Rahul was the only designated batter left as he once again proved his utility in the middle overs with an unbeaten 64 off 103 balls that took India home with 40 balls to spare.
While there was a bit of seam movement on offer and ball from spinners gripping a bit, to be fair, there was no scoreboard pressure on the home team.
“I won’t say it was a flat wicket, or it was doing a lot that it was impossible to bat. When Sri Lanka started, I thought it was a 280-300 wicket,” Rahul said after the match.
Having started off with a boundary, Rahul was quick to slow down as he ran hard for his singles en route to a 93-ball fifty.
The need of the hour was to play sensibly as Rahul and Hardik Pandya curbed their natural strokeplay in a decisive 75-run partnership that came off 119 balls.

It was also a different Pandya (36; 53b) on display as he took time and gave Rahul a perfect support. Pandya however departed against the run of play, leaving 55 runs required from 95 balls.
India earlier endured some tense moments inside the powerplay when Rohit Sharma (17) and Shubman Gill (21) departed in four deliveries after an attacking start, while Virat Kohli (4) became the third casualty to be 63/2 in 9.3 overs.
Rohit took a faint edge behind the stumps to be dismissed by Karunaratne. In the next over Shubman Gill, who wowed the packed Eden crowd with his delectable cover drives, had a soft dismissal giving a straight catch to Avishka Fernando at short midwicket off Lahiru Kumara.
The pacer, who replaced an injured Dilshan Madushanka (dislocated shoulder), was all charged up when he cleaned up the last match centurion Kohli with a delivery that jagged back in.
More anxiety was in store as India were reduced to 86/4 in 14.2 overs when Shreyas Iyer was dismissed leg before by a ball going down the leg.
However, Rahul, relishing his role as a No. 5 was never in tearing hurry as he anchored the chase to perfection. He needed one good stand and in vice-captain Hardik Pandya (36) he got an able ally as they put up 75 runs.
“The good thing about batting at No. 5 is you don’t have to rush. You can take a shower, put your feet up and watch the game. But I always think what team needs of me. If you can read the situation when you go in, it helps you and team. Batting at No. 5 has helped me understand my game better,” Rahul said.
Kuldeep shines through
Treated as disposable time and again by the current Indian team management, Kuldeep Yadav once again displayed his skills with the ball and required calmness with the bat in his two boundaries towards end of the chase.
The left-arm wrist spinner, who was mysteriously left out after a five-wicket haul in his comeback Test against Bangladesh in Chattogram last month, got a surprise call-up after leg-spinner Yuzvendra Chahal pulled out with a “sore right shoulder”.
Kuldeep (3/51) answered the call grabbing three wickets in his first five overs, in a spell that triggered Sri Lankan collapse from being 102/1 just when it seemed that debutant Nuwanidu Fernando (50 from 63 balls) and Kusal Mendis (34 from 34 balls)had started to frustrate Indian bowlers post Powerplay with a swift counter-attack.
But as Kuldeep ran through the Sri Lankan middle-order that included the prized-scalp of rival skipper Dasun Shanaka (2), the visitors went on to lose five wickets in the space of 43 balls to virtually lose the plot after they opted to bat on a flat deck.
But some late fireworks by Dunith Wellalage (32) and Wanindu Hasaranga (21)took the team past 200-run mark before Siraj (5.4-0-30-3) polished off the tail.
Young Umran Malik also returned with figures of 2/48 from his seven overs.
Replacing in-form opener Pathum Nissanka (stiff back), youngster Nuwanindu Fernando looked solid and hit a splendid half-century on debut in a 73-run partnership with Kusal Mendis (34).
The Indian new ball bowlers Mohammed Shami and Mohammed Siraj swung both ways and got some early movement.
(With inputs from PTI)