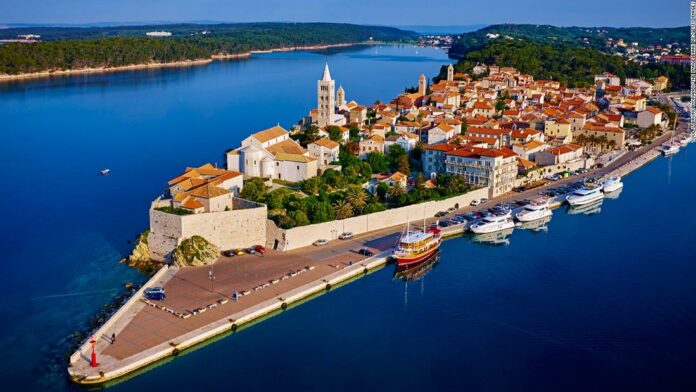 Editor’s Note — Sign up for Unlocking the World, CNN Travel’s weekly newsletter. Get news about destinations opening, inspiration for future adventures, plus the latest in aviation, food and drink, where to stay and other travel developments.

(CNN) — Head to Croatia’s northern Adriatic coast to discover some of the country’s most captivating regions. While Dubrovnik and other parts of southern Dalmatia get the lion’s share of attention, the Istrian peninsula and the neighboring islands and coastal ports of the Kvarner Gulf reveal other sides of Croatia’s rich culture and history.

In fact, there’s almost too much history to absorb — ancient Greeks and Romans, Venetians, Austro-Hungarians and Italians have all left their mark on the region’s architecture, the language and the food.

Ah, yes, the food. Truffles, olive oil and deliciously juicy oysters and mussels in Istria, fabulously fat langoustines in the Kvarner Gulf, gorgeously flavored lamb from Cres — and they all go beautifully with Istrian malvazija whites and teran reds, and a crisp white žlahtina from Krk.

When you’re not exploring ancient Roman ruins, Venetian villages and Habsburg towns, you’re basking on the hundreds of beaches that run along Istria’s long coastline to the neighboring Opatija Riviera and the shores of the Kvarner Gulf. Then hop on a ferry to roam the islands of the gulf — Krk, Cres, Lošinj and Rab — each accessible from the other, but all demanding a lingering look.

Medieval Motovun clings to the hillside rising above vineyards.

Work your way along the heart-shaped coast of the Istrian peninsula and you’ll wonder if you strayed across the Italian border by mistake. At various points in its long history, Istria was part of the Roman, Venetian and Habsburg empires — as well as Italy itself until after the Second World War — and you can see and taste this legacy everywhere.

Pula has a glorious Roman amphitheater.

In Pula at the peninsula’s southern tip, you’ll see one of the world’s best-preserved Roman amphitheaters, an atmospheric setting for concerts and the Pula Film Festival. Along the western coast is the impossibly beautiful port of Rovinj — or Rovigno, as it’s also known in this bilingual town. Its Venetian-style townhouses squeeze into narrow alleyways and tiny squares in the medieval old town where, at some point, you’ll find yourself on the cobbled steps of Grisia, one of its prettiest lanes. Taking one of the boats that regularly hop across to the small island of Sveta Katarina reveals the best view of the city.

The Parenzana trail runs along an old railway line.

Head inland and you enter Istria’s world of hilltop medieval villages, rolling vineyards and truffle forests. Clinging to the hillside rising above vineyards is medieval Motovun, one of the most attractive bases from which to explore the area. From here it’s a short drive to Grožnjan, scene of summertime outdoor concerts and a place to browse the artists’ studios that have opened up over the decades. One of the most appealing ways to explore inland Istria is by hiking or cycling the Parenzana Trailwhich follows the winding route of a disused railway line for about 80 miles.

Opatija is lined with Belle Epoque buildings, like Villa Angiolina.

When the Habsburgs discovered the mild climate of Opatija in the 19th century, they turned what had been a small fishing village on the Kvarner Gulf coast into the cradle of Croatian tourism.

Pastel-colored Belle Époque townhouses soon sprang up, many of which are now Opatija’s grand hotels. Park Angiolina near the seafront is a good introduction to this elegant town: a calm place of neat gardens, it’s also home to the 1844 Villa Angiolina, which now houses the Croatian Museum of Tourism.

One of the most pleasurable ways to explore the town — and other parts of the Opatija Riviera — is to follow the Lungomare. This seafront promenade winds along the coast for nearly five miles from the fishing village of Volosko north of Opatija to the town of Lovran at the foot of the Učka Nature Park.

Croatia’s biggest port is much more than just a jumping-off point for ferries to the islands of the Kvarner Gulf. This cosmopolitan city — 2020’s European Capital of Culture — is worth a lingering look. The Korzo is Rijeka’s main pedestrianized thoroughfare that’s the heart of the city, wandering past Habsburg-era townhouses and inviting café terraces. Then quirky PEEK&POKE Computer Museum offers a nostalgic look at vintage computers and other tech.

To go much further back in time, climb the 528 steps (or take the bus) to Trsat Castle, a 13th-century fortress on a bluff overlooking Rijeka, for glorious views of the city and the islands of the Kvarner Gulf. Trsat is also a place of pilgrimage — it’s home to the Church of Our Lady of Trsat and its neighboring park, with the Stations of the Cross along its footpaths and viewpoints.

Krk is an ideal beach destination.

Tied with neighboring Cres for the biggest island in Croatia, and home to Rijeka Airport, Krk is attached to the mainland via a long bridge. Many visitors make a beeline for the lively beach resort of Baška, in a sheltered spot on Krk’s southern end — but there are many more beaches along the heavily indented coast. The village of Vrbnik is the place to try Krk’s indigenous white žlahtina wine.

Krk Town, the island’s largest settlement, reveals the region’s complex history within its old town, with its medieval fortress, Roman masonry, and Venetian houses on narrow cobblestoned alleyways. Look out for hiking trails that lead you to secluded pebbly beaches.

Cres Town is another mini Venice.

The long, thin island of Cres snakes along Krk’s west coast. This is a relatively unspoiled part of the Adriatic where sheep roam scrubby pastureland and produce some of Croatia’s tastiest lamb. You’ll find only a handful of villages, including the tiny Venetian-style Cres Town and the considerably smaller Osor, which dates back to Roman times, and whose lanes are filled with public art.

It’s an agreeably sleepy place, with quiet pebbly coves, an inland freshwater lake and the unexpected sight of a rescue center for griffon vultures in the northern village of Beli. When you’re not relaxing on the beaches at Valun or Lubenice, you can explore more than 60 miles of hiking trails that combine the wilderness of the hinterland with the shimmering beauty of the coast.

Unspoilt Lošinj is the perfect retreat.

Attached to the southwestern side of Cres by a swing bridge, Lošinj dangles into the furthest reaches of the Kvarner Gulf. While it can take a bit of effort to get there, it’s infinitely worth it.

Smothered in wild herbs, Lošinj is soothingly fragrant, which you’ll discover as you walk or cycle along the pine-shaded paths that frame parts of the island.

Its two main villages, Mali Lošinj and Veli Lošinj, show their Venetian legacy; in fact, Veli Lošinj’s brightly colored houses resemble those on the Venetian island of Burano. In Mali Lošinj’s Museum of Apoxyomenosyou’ll get a taste of ancient history when you gaze at a bronze statue of a Greek athlete that had been lying undiscovered in the Adriatic for more than 2,000 years.

Back in the 19th centry, the Austro-Hungarian emperor Franz-Joseph spotted Lošinj’s potential as a place to unwind completely in that gorgeously scented air. One of his favorite spots was the misshapen Čikat Bay, whose clear waters fringed by Aleppo pines are as alluring as ever.

Royalty of a different sort put the island of Rab on the map. In 1936, Britain’s short-reigning King Edward VIII and his then-lover Wallis Simpson stripped off and jumped naked into the waters off the Frkanj peninsula, sparking a tradition of naturism that has never left. Somehow this small island manages to pack in at least two dozen sandy beaches — quite a feat in a country that’s dominated by pebbly and rocky coves. Go hiking in the Lopar peninsula and you come across several of the loveliest.

It wasn’t just the clear waters of Rab that enchanted the royal visitors. The exquisite and beautifully preserved medieval architecture of Rab Town, which includes four Romanesque campaniles, is just as enticing.