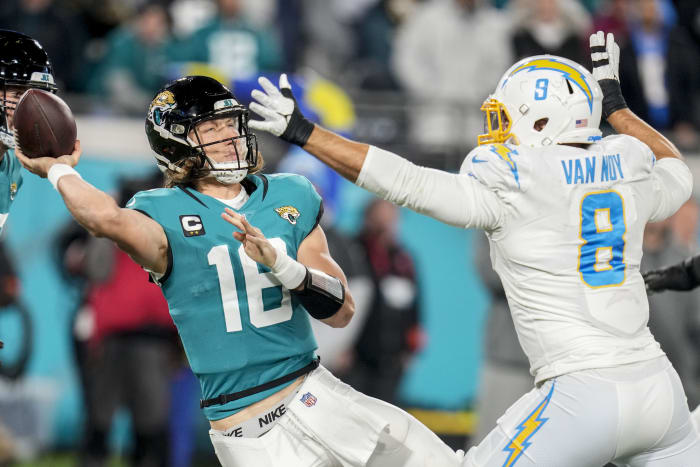 JACKSONVILLE, Fla. – The Jaguars will hit the road for their second-round playoff game for a rematch of a regular season showdown with the Chiefs.

Jacksonville will travel to Kansas City for the AFC divisional showdown on Saturday at 4:30 p.m. as Trevor Lawrence and Doug Pederson try and keep the Jaguars’ dream season going.

Expect cold temperatures and a difficult atmosphere to play in. The extended weather forecast calls for 37-degree weather with it dipping to below freezing by the early evening.

The opportunity for another playoff home game was erased when the Bills held on to beat the Dolphins, 34-31 on Sunday. And when the Bengals hung on for a 24-17 win over the Ravens in the other AFC game, that result wound up punching Jacksonville’s return trip to Kansas City.

A Ravens victory would have sent the Jaguars to face Buffalo.

The Jaguars faced Kansas City in Arrowhead Stadium in Week 10 and lost 27-17. The Chiefs had a bye in the playoff opener. Jacksonville erased a 27-0 deficit and surged back to stun the Chargers 31-30 on Saturday night at TIAA Bank Field. It was the third-largest comeback in playoff history and the fifth-biggest comeback in NFL history.

That means another showdown between Lawrence and Kansas City’s Patrick Mahomes, a head-to-head clash that could happen for years to come, too. Mahomes is already a Super Bowl champion and an NFL MVP at 27 years old. Lawrence, 23, has looked liked the generational prospect he was projected to be when he was taken No. 1 overall in 2021 out of Clemson.

It’s also another meeting between Jaguars coach Pederson and one of his mentors, Andy Reid. Pederson played under Reid in Green Bay and Philadelphia, and later coached with him in Kansas City and Philadelphia. Reid beat Pederson head to head for the first time in a 2017 game when the Chiefs beat the Eagles 27-20. He is 2-0 against Pederson.

Pregame photo gallery | Can you feel the energy from these pregame tailgate parties?

Clowns to crowns | How the Jaguars went from worst to first

Who needs to sit down? | Not this fan, who was happy for standing-room only ticket

SnapJax gallery | Checking out some of your photos from Saturday

Playoff party | Fans show up in force for playoff game

Our predictions | How’d we do picking the game?

The Jaguars have won six straight games after arguably the most unbelievable win in franchise history over the Chargers. Jacksonville committed five turnovers, including four first-half interceptions by Lawrence, and completed an improbable comeback on a 36-yard field goal as time ran out by Riley Patterson. That was the only lead Jacksonville had all game.