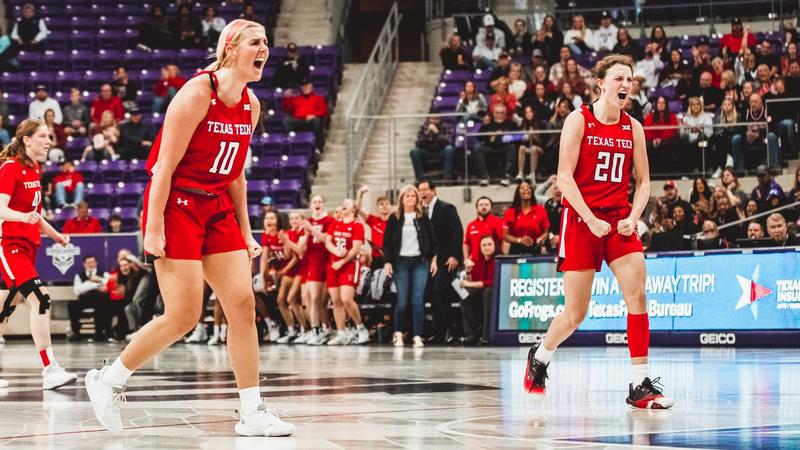 FORT WORTH – Powered by clutching shooting from the free-throw line, and a couple of key defensive plays, the Texas Tech Lady Raiders downed TCU, 78-70 Saturday afternoon at Scholmier Arena.

Over the final nearly three minutes of action, Texas Tech (13-3, 1-2 Big 12) used clutch 8-of-10 shooting and two strong defensive plays to close out the road win.

With the Lady Raiders up 66-65, both teams were whistled for technical fouls. After TCU (6-8, 0-3 Big 12) knocked down a pair, Bailey Maupin stepped to the line and calmy sank both of Tech’s attempts.

On the ensuing Tech possession, forward Ella Sixteen connected on a layup that gave her team a 70-67 lead with 2:41 to play.

TCU was fouled on its next offensive possession and made one of two to draw wo within 70-68 with 2:20 to play.

Tech once again found its way to the free throw line on the next possession, as Bryn Gerlich nailed a pair to give the Lady Raiders a commanding 72-68 advantage with 2:10 to play.

Tofaeono contributed maybe the most important defensive play of the ball game when she blocked a Horned Frog layup. The post secured the rebound giving Tech the ball back with 1:55 to play. The forward was fouled 20 seconds later hitting one-of-two to extend the Tech lead to 73-68.

After the two teams traded defensive stops, a Gerlich driving layup with 51 seconds to go gave Tech a 75-68 advantage.

Guard Bre’Amber Scott finished as Tech’s leading scorer on her 24th Birthday, scoring 20 points while Gerlich finished with 16. Maupin was Tech’s third player in double figures, as the freshman finished with 14 points.

In the end, Saturday’s Tech win featured 20 lead changes as the game was tied 15 different times. After heading into the break trailing 31-30, Tech outscored TCU 48-39 in the second half.