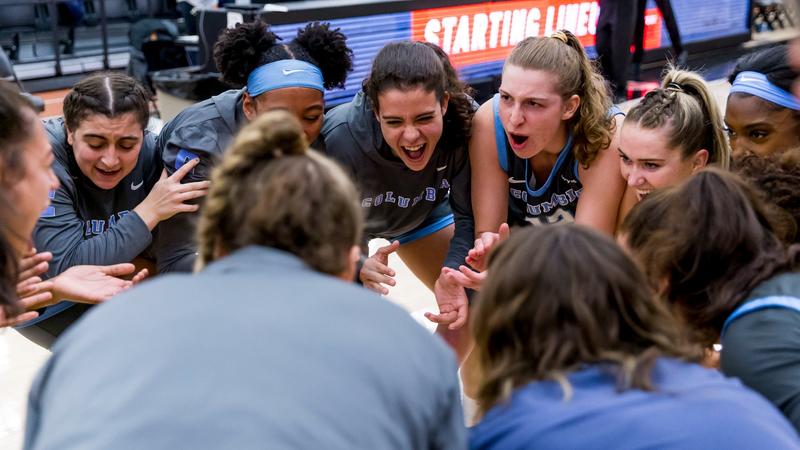 Fans unable to attend can watch the Lions take on Harvard in the New York market on SportsNet New York (SNY) and SNY.TV. The game will also be streamed online through ESPN+. Live stats will be available on GoColumbiaLions.com.

Monday’s game at Cornell will be streamed live on ESPN+. Live stats will be provided by CornellBigRed.com.

Stick around following Saturday’s game against Harvard, as the Lions will be holding a postgame autograph session!

• The Lions are receiving votes for the second consecutive week in the USA Today Sports Coaches Poll. The poll is voted on by 32 NCAA Div. I head coaches, representing each of the 32 conferences.

• Columbia is ranked No. 35 in the latest NCAA NET (Jan. 12). The Lions have been ranked as high as No. 23, which they achieved for the first time on Dec. 14. Columbia is currently the highest-rated team in the Ivy League and the third-highest of all teams outside of the power six conferences (MTSU, South Florida).

🔙2️⃣🔙 Receiving Votes in the @usatodaysports Coaches Poll for the 2nd straight week! 🦁

• With a season-high 13 rebounds in Columbia’s overtime victory at Princeton (Jan. 6), Kaitlyn Davis became the 14th player in program history to reach 500 career rebounds. The senior from Norwalk, Connecticut is the first Lion to reach the milestone since Camille Zimmerman ’18CC. Zimmerman wound up with 940 in her career, which is Columbia’s all-time record. Davis, who missed a year of competition due to the COVID-19 pandemic, averages 7.5 rebounds per game through her career. She reached 500 in her 71st career game.

A STREAK FOR THE RECORD BOOKS

• Columbia won a program record 10 consecutive games from November 25 to January 6. The winning streak started with a convincing 95-57 thrashing of Arkansas-Pine Bluff at the Miami Thanksgiving Tournament. The Lions went on to beat the host Hurricanes, 78-71, to win the tournament title. They then rolled off a perfect 7-0 December with a notable, 84-73, road victory over reigning Atlantic 10 champion UMass. The 10th and final win of the streak was perhaps the most memorable, as the Lions took down reigning Ivy champion Princeton, 58-55, in overtime at Jadwin Gymnasium. The victory was Columbia’s first over the Tigers since 2008, snapping a 27-game series losing streak.

• After a 2-0 start to Ivy League play that included a home win over Princeton, Harvard (9-6, 2-1 Ivy) was handed its first loss of the year by rival Yale, 71-70, in overtime on Saturday. Harmoni Turner leads the Ivy League in points per game with 18.9. She is one of three Crimson players averaging double figures, along with Lola Mullaney (13.0) and McKenzie Forbes (12.9). Turner also heads the team on the glass (5.8) and in both total assists (57) and steals (47). Harvard is under the direction of first-year head coach Carrie Moore, who took over for Kathy Delaney-Smith following the legendary coach’s 40-year career.

• Cornell (8-8, 1-2 Ivy) started off the Ivy League season on New Year’s Day with a 13-point win over Dartmouth. Last weekend, they hit the road to battle Penn and Princeton, rallying in the fourth quarter before ultimately falling to the Quakers, 62-54. They were outmatched the following night against the Tigers, 70-48. Ania McNicholas is the only player averaging double figures (11.4), with Shannon Mulroy (9.3), Emily Pape (8.9) and Kaya Ingram (8.8) not far behind. Mulroy has tallied a team-high 60 assists, good enough for second in the Ivy League.