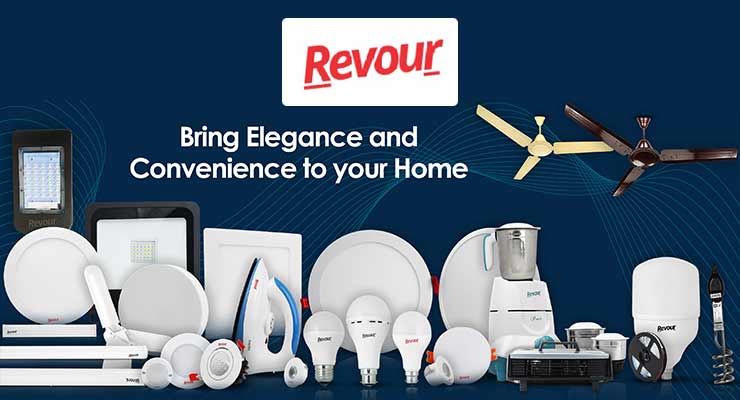 Revour was launched during COVID which was one of the toughest times for an entrepreneur both business-wise as well as emotionally. When the whole world was shifting to Online sales, they saw an opportunity in the offline market in India’s second largest imported commodity after Oil & Gas i.e. consumer electronics and appliances accounting for ~15% of India’s import bill as per the department of commerce, India.

Started in Sep 2019. Revour has built its network in the remotest towns in India with a population of less than 2 lakh to even metro cities covering more than 14 states in India. The brand concept is embodied in their name, which translates as “meet again.” Currently, they are present in Lighting, Kitchen, and Home appliances selling more than 250+ attractive, smart, and energy-efficient SKUs with 10,000+ retail touchpoints. They have managed to challenge the status quo wherein companies typically launch online first and then move offline to create a sustainable brand. They did the reverse and are now along with their strong offline channel have a presence on Amazon, Flipkart, and selling directly through their website.

The driving forces of Revour Ranjit Singh, director, and co-founder has over 30 years of expertise in consumer sales across renowned brands including Philips, Polycab, Bajaj, Surya, and Pepsi, and has managed to dramatically build various consumer electronics products verticals from scratch over the previous three decades. His efforts have put Revour on the map in over 100 districts and 175 towns across India. He is a history buff who enjoys composing poems in his spare time. Ranjit excels in handling the offline business aspect of the startup.

Jaideep Singh Gaur, the director, and co-founder of Revour has over ten years of investment banking experience working with companies like KPMG, BMR, and Mobikwik. He holds an MBA from Welingkar Institute of Management in Mumbai and a Bachelor’s degree from BIT, Mesra. Jaideep’s profound knowledge of fundraising, technology, understanding of business models, and operations added to the growth of Revour. He is a state-level basketball player who enjoys traveling and reading during his free time.

The scope of Revour and consumer electronics National Policy on Electronics 2019, PLI scheme, Reforms like simplified labor laws and Technology Upgradation Fund Scheme, and Localised Chip manufacturing is the beginning of India competing with global world consumer electronics manufacturing powers like China and Taiwan in the coming decade. This will further boost their efforts in achieving Revour’s vision to become an affordable consumer electronics brand known for its premium quality and service.

Great marketing won’t fix a bad product. Revour only works with top-rated OEMs supplying to one of the world’s largest consumer electronics brands. An asset-light strategy has been the key thesis behind Revour partnering with the best Indian OEMs to provide new-age specialized consumer electronics products. Revour’s omnichannel strategy is its key strength. They sell almost 20lakh units per year which means they can push 20lakh customer impressions online with zero cost of acquisition. Similarly, the online channel is serving them well to try out new products with their customers and then launch them across the length and breadth of India in 14 states where they have a presence. Creating differentiation in a commoditized market is going to be one of the biggest challenges that Revour faces. The introduction of products in the entry-level segment has helped them focus on generating enough cash flows to venture into developing newer products in digital-first and smart categories. New businesses are bound to face challenges from traditional brand names. Right pricing and proper execution can rise any startup at par with the behemoths of that industry, just like Revour. They are competing with Lifelong, Atomberg, Candes, Inalsa, Luker, and Baltra to name a few category leaders.

Knowing where your customer sits is half the job done. Revour targeted local retailers which still accounts for the majority of consumer electronics sale in India. Similarly in the online space, even one of the largest brands in India like Boat sells 80%-85% on marketplaces and not on their website. Target where your customer sits. Revour is now putting immense efforts to reach out to the customer directly. The level playing field for brand building. New-age SAAS platforms have benefitted brands like Revour with seamless integration with warehousing, logistics, and payments gateways partners. 10+mn new sellers onboarded last year in India on marketplaces. With more than 10mn+ online active buyers and a QR code at even the remotest location in India, we think Revour is uniquely placed to benefit from both offline and online growth that we are witnessing in India. The online consumer electronics market is estimated to reach $30.6 bn by 2025 i.e. ~ one-third of the total D2C addressable market. Consumer electronics is the highest contributor to India’s D2C space. Decision makers buying more: 44% of online shoppers are women vs 10% 4 years ago.

The combined experience of more than 150 years of Revour’s advisors and founders has helped the company create a strong 45-member rockstar team with almost ZERO attrition. Hiring is one of the biggest challenges an entrepreneur faces during his initial years. Experienced. management is the key to hiring right.

Lastly, Investing in the right technology and ERP system has helped Revour manage its working capital, distributors, and Sales representatives very efficiently. Using technology has helped save a lot of time for team members from repetitive tasks, providing them a platform for cross-functional learning and to keep growing their skillset. Currently, Revour is clocking a sale of INR 2 crore/month with 50 crores in cumulative revenues in just 24 operational months since starting the pandemic, all of this with bootstrapped capital. This is what they call the power of right execution and in-depth understanding of Indian consumers and their needs. They have plans to raise their next round of funding soon and aim to achieve a 1000cr annual revenue run rate in the next 5 years. Revour is constantly working with their manufacturing partners to introduce India-first product range in the Home, kitchen, and lifestyle categories. Their network of 10,000+ retailers which will soon be reaching 15,000+ by this year-end will ensure to provide seamless servicing to their customers across the length and breadth of India and be a key player in India’s $100bn D2C market opportunity.