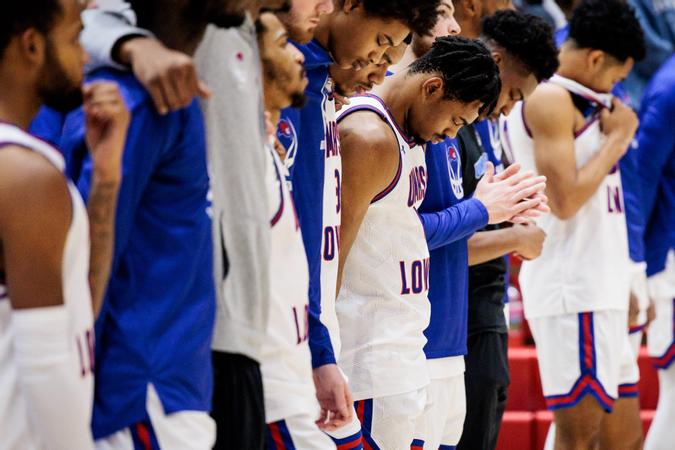 The UMass Lowell men’s basketball team (17-4, 5-2 AE) hit the road for a two-game trip, starting with a rematch against Maine on January 25.

A win against the Black Bears would improve UMass Lowell’s record to 18-4, continuing the program’s best start since 2002-03. It would extend the program record for wins in a season at the DI level to 18, as well. A win would also move the River Hawks to 6-2 in conference play, setting another Division I program record.

Three River Hawks are averaging double-digits, as Everette Hammond leads the way with 12.8 points per game on 44% shooting from the field. Tied with him, Abdoul Karim Coulibaly averages 12.8 points, while adding a team-best 8.6 rebounds. The primary playmaker this season, Ayinde Hikim totals 86 assists with 10.1 points. Max Brooks adds 9.2 points and 5.4 rebounds per game, and paces the team with 40 blocks.

Abdoul Karim Coulibaly totaled 18 points alongside a career-high 15 rebounds, as the UMass Lowell men’s basketball team took down America East newcomer Bryant. The River Hawks opened the game strong,  taking an 11-3 lead before the Bulldogs struck back, cutting the difference down to one. However, the River Hawk offense could not be stopped, as they went on an 16-2 run to break open the game early. The Bulldogs looked to chip away at the lead, scoring eight of the next 12 points, but the hosts did not slow down, adding another 22 points before the half to hold a dominating 57-31 lead. UMass Lowell kept their momentum coming out of the locker room with layup from Brooks. Hammond followed with a step-back three, giving the River Hawks a 62-31 lead, their largest of the afternoon. Bryant continued to chip away throughout the second half, but the lead proved to be too large, and UMass Lowell walked away with a 98-79 victory.

HISTORY IN THE MAKING

The win against Bryant on Jan. 22 was the 17th victory for the team this season, extending the new Division I program record for total wins in a season.

The River Hawks were ranked in the Mid-Major Top 25 for the first time ever during the week of Dec. 12 when they moved into the No. 25 spot. Up as high as No. 17 during the week of Jan. 2, the team checked in at No. 24 in the most recent release.

For the first time at the Division I level, the River Hawks played in front of a sellout crowd at Costello Athletic Center.

ALL ABOUT THE BIGS

Abdoul Karim Coulibaly and Max Brooks combined to go 22-for-28 from the field with 44 points against UMBC on Jan. 18. Coulibaly set a new career high with 24 points, while Brooks boasted a season-best 20 points.

The River Hawks logged a season-high 23 assists in the win against UMBC on Jan. 18. The team is currently second in the league with 15.2 assists per game. Individually, with his 11 assists against Sacred Heart on Nov. 16, Ayinde Hikim set a new Division I program record after Ryan Jones first logged 10 in 2018 vs. NJIT.

The River Hawks turned in their best performance from long range this season to earn just their second win in the last 13 meetings against the Catmounts on Jan. 11. The team, which sunk 13 threes on 59.1% shooting against Vermont, now leads the league with a 37.6% clip from beyond the arc in 2022-23, including at least eight threes in nine of their 20 contests. While Ayinde Hikim went a perfect, 4-for-4 from three-point territory against Vermont, Yuri Covington has drained a team-best 32 threes this year.

Coach Duquette has said this is his deepest and most talented team yet. Eight different River Hawks have already led the team in scoring this year, and six of those have led the team in scoring in at least two games. The River Hawks have also boasted at least eight scorers in 20 of their first 21 games, including 11 against Emerson. In the contests against Fisher and Emerson, the team totaled six, double-digit scorers for the first time since 2017-18 (at Maine, 1/31/18). At least four River Hawks have scored in double figures in 11 of the 21 games.

The River Hawks, who shot a season-high 63.5% from the field in the win against Emerson, have outshot their opponents in 18 of their 21 games this season. The team surpassed 50% shooting in 10 out of 20 games so far, as well. The team is averaging 49.0% from the field to rank 14th in the nation.