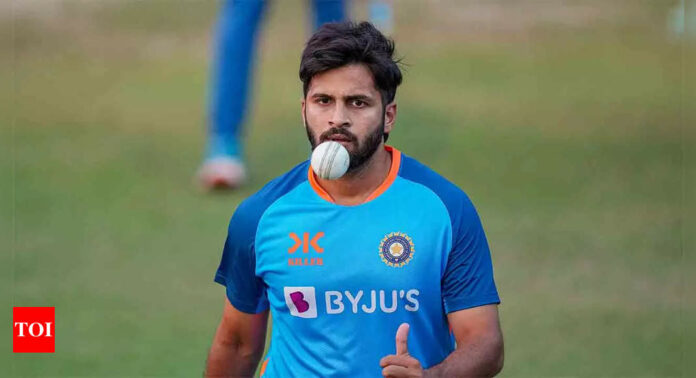 INDORE: A video, which went viral after India’s 90-run win over New Zealand in the third ODI at the Holkar Stadium, showed India skipper Rohit Sharma venting his frustration at Shardul Thakur after the pace bowling all-rounder conceded back-to-back boundaries by bowling short balls to the night’s centurion, Devon Conway.
It didn’t take Thakur long to please his captain again. Wiping off Rohit’s disappointment with him in his next over, Thakur picked up Glenn Phillipswho edged a heave on the on-side, and was caught by Virat Kohli. Post the game, Rohit and Thakur hugged each other, celebrating India’s 3-0 clean sweep of New Zealand.
It was a game that showed why the ‘Palghar Express’ continues to remain integral to Team India’s ODI World Cup plans, even if he may have lost his place in the T20 and Test and ODI formats for now. In a match which saw Rohit, Shubman and Conway stroke breathtaking centuries, it was the Mumbaikar who walked away with the Player of the Match award, scalping 3 for 45 in his 6 overs.
Earlier in the game, he chipped in with a vital 25-run cameo, which took 17 balls and had three fours and a six. When he walked in, India, at 313 for 6 in the 43rd over were threatening to blow up a dream start by Rohit and Gill. In him, Hardik Pandya found the perfect ally as the duo added 54 in just 34 balls to give India a total they could bank on, on a road-like pitch.
Bouncing back after going for 30 in his first three overs which went wicketless, Thakur changed the complexion of the match with his second spell, snapping Daryl Mitchell and Tom Latham‘s wickets off consecutive balls, before sending back Phillips in his next over.

Shardul Thakur. (PTI Photo)
Asked about Thakur’s utility in the team post the match, Rohit went ga-ga over the 31-year-old. “He has got the knack of taking wickets at the crucial time for us. We have seen it not just in ODI cricket but also in Tests. He’s very critical to us, and where we stand as a team. So, I just hope he keeps putting up performances like this and it will only do good to the team and give him confidence that he can come and take wickets,” the Indian captain praised.
“This guy is very smart, he has played a lot of domestic cricket and understands what needs to be done,” Rohit added. The Indian captain liked the way Thakur and his other teammates planned the dismissal of his New Zealand counterpart Latham. “In this format, you need to use your skills and he (Shardul) definitely has them. He bowled a good knuckle ball to Tom Latham today (Tuesday), nicely planned in the middle by Virat, Hardik, and Shardul,” Rohit complimented.
With 6 wickets in three ODIs@20.83, Thakur enjoyed a decent series against the Kiwis, justifying the decision to play him ahead of the pacy Umran Malik in the first two games. At 6.46, his economy rate was on the higher side, but then two of the games were played on extremely flat wickets, and ‘Lord Thakur’ is known to be a partnership-braker, a bowler who will go for wickets than look to control runs.
How much faith Rohit has in his Mumbai teammate’s abilities can be gauged by the fact that the India skipper asked him to bowl the final over in Hyderabad in the first ODI, when New Zealand had 20 to get, with a rampaging Michael Bracewell in full cry. Even though Bracewell smashed him for a six off his first ball, and the next one was adjudged a wide, Thakur didn’t lose his nerve. He unleashed a leg-stump yorker that trapped Bracewell in front, and India had won a close game.
It helped Thakur that in the build-up to this series, he had a good outing in the Ranji Trophy, taking six for 122 (2-68 & 3-54) to help Mumbai record a massive win over Assam. Excluded from India’s Test team for the iconic series against Australia despite not being in the XI for both the Tests in Bangladesh, he hasn’t played a T20I since February last year.
He may not be an allrounder in the league of Hardik Pandya. Neither is he the ace in the pack like Mohammed Shami and Mohammed Siraj. Neither does he have lethal pace like Umran Malik. What Thakur has, is some swing, loads of heart, and some useful batting skills which can be handy at vital junctures.