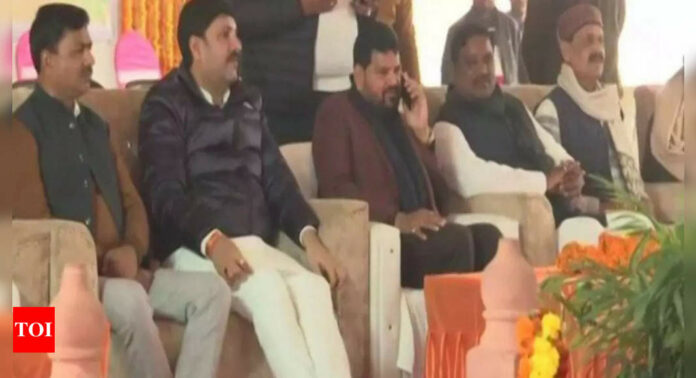 GONDA: The Wrestling Federation of India (WFI) called off its emergency general council meeting scheduled to be held in Ayodhya on Sunday. Called to evolve the strategy to deal with the controversy surrounding its president Brij Bhushan Sharan Singh and some other officials, the meeting was cancelled at the last moment as the sports ministry late Saturday evening suspended all the activities of the federation till an oversight committee got appointed to oversee its day-to-day operations.
Secretary general of WFI, VN Prasood, said, “We will cooperate with the government and provide whatever assistance is required. No meeting took place on Sunday and it was cancelled soon after we got the ministry’s letter. The committee constituted by the government will oversee the operations of the federation till further orders.”
“The meeting has been cancelled but since all of us were here, we decided to have breakfast and refreshments before leaving for our destinations,” said a participant not willing to be identified.
At a resort on Ayodhya bypass where the meeting was scheduled to take place, the WFI office-bearers stayed in their rooms to avoid news channels. Karan Bhushan Singhthe son of Singh and vice-president of the federation, was also present at the resort but did not talk to the media. Later, a group escorted some of the office-bearers in private vehicles, probably to Gonda, to meet Brij Bhushan.
In Gonda, the gates leading to the palatial ‘kothi’ of BJP MP Brij Bhushan Sharan Singh at Bishnoherpur village opened on Sunday only when a familiar face wanted to get through. While private vehicles kept entering and exiting the ‘kothi’, media persons were kept at an arm’s length. Singh remained confined to his residential enclave all through the day.
At Nandini Nagar educational institute in Nawabganj, where the Kaiserganj MP has founded the National Wrestling Academy, there is an uneasy calm a day after the three-day open national senior ranking tournament between January 21-23 was cancelled by the sports ministry.
Scores of workers were deployed to remove banners, hoardings, sound system and chairs that had been put up for the tournament. On Saturday, around 8,000 people had gathered at the institute to watch the inaugural ceremony and grapplers in action. It was Brij Bhushan’s appearance here on Saturday as a ‘guest’ that miffed the ministry and it cancelled the tournament.
Shortlisted from such tournaments, at least 40 athletes are trained at the wrestling academy every year and the institute provides funds required for boarding and lodging for the budding wrestlers who go on to win domestic and international competitions.
Top wrestlers of the country have alleged that Singh and his close aides had sexually harassed them during their training at the Nawabganj institute.