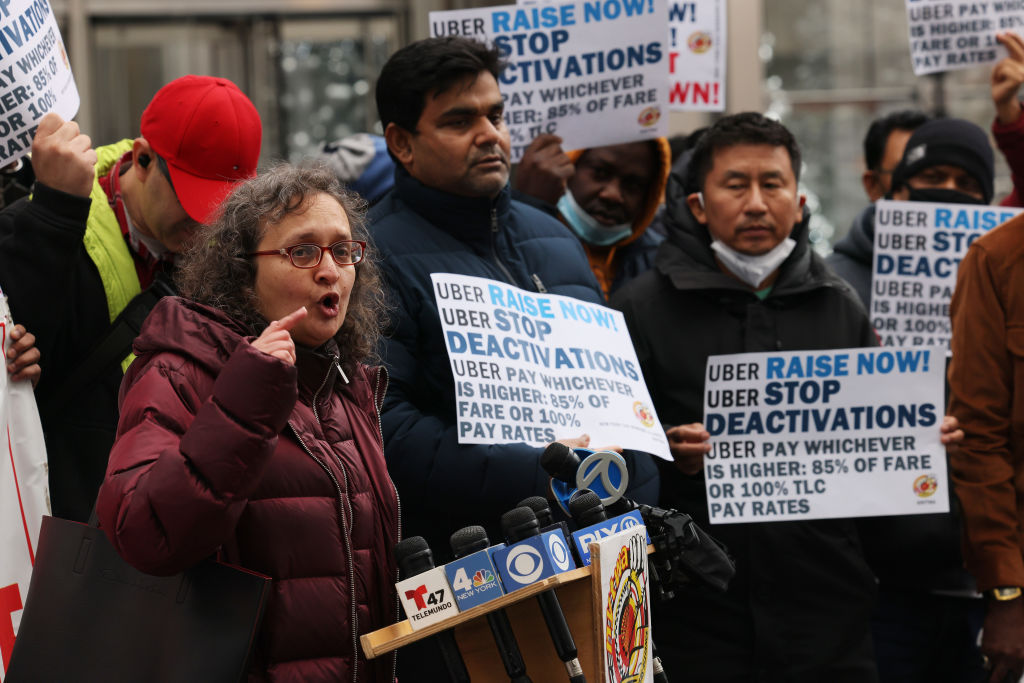 Manhattan’s Financial District has lost much of its bustle and drive over the years, but its gleaming buildings, even empty, still seem to show off global capitalism’s power. On Thursday at lunchtime, however, a couple hundred taxi drivers — a diverse crowd of mostly first-generation immigrant men — convened and flexed a power of their own.

The drivers were on a one-day strike, the second in an ongoing struggle with the ride-hail company over a hard-won raise.

As a result of a yearlong campaign by drivers, New York’s Taxi and Limousine Commission (TLC) mandated in November that drivers get a raise of about $1,000 a month. The commission’s decision was unanimous, but Uber refused to comply and sued the TLC last month. After that, about a thousand Uber drivers engaged in a one-day strike over the same issue, forgoing income from Christmas shopping crowds, and some drivers conducted a car caravan protest over the Brooklyn Bridge. A state court hearing is scheduled for today, which will determine whether to grant the raise while Uber’s case proceeds.

At the rally on Thursday, drivers lambasted Uber’s friendly rhetoric, noting that the company promised drivers “a great career, a great future.” As one speaker mentioned that Uber refers to drivers as “partners,” a fellow driver called out from the crowd, “Bullshit! They treat us like slaves, not partners!” Another man in the crowd joked darkly that the tech company was like “an abusive partner.”

Even before the pandemic or the war in Ukraine, since the incursion of ride-hail apps like Uber into the industry, New York City drivers have in recent years faced so much economic hardship that some have taken their own lives. Drivers are more likely than the general population to die of diabetes, as well as stress-related conditions like high blood pressure.

“We fought so hard for this raise,” driver Alpha Barry said, addressing the crowd. “We have never been paid for the work we do. We rescue people. When someone gets out of a club at 2:00 a.m. freezing and drunk, we take that person home safely.” Yet Uber, he said, “treats us like shit.” Other drivers also emphasized their centrality to New York life, at one point interrupting a speaker to yell, “We are the lifeblood of the city!”

As important as taxi drivers are to New York life, they are even more vital to Uber’s profits: neither an app nor a team of tech bros will pick you up and drive you home, and as much as the capitalist class wants driverless cars, they are nowhere near mass implementation. The drivers hammered on this point. “A fish outside of water is a dead fish,” said Barry, a dignified-looking man with a mustache, wearing sunglasses and a stylish light gray coat. “Without us, Uber is nothing. We made them who they are today.”

The New York City drivers are joining workers all over the world — in Bangladesh, Tunisia, Greece, France, the United Kingdom, and many other countries — who have been demanding fair pay increases so that they can survive inflation, as we observed recently. Like all Americans, drivers must pay more for bread, eggs, and milk. But Uber drivers must also pay for their own gas and other car-related expenses — these are not covered by Uber — and these have gone up even more than other household costs. (Though the cost of gas in the United States has recently stabilized, at times over the past year the price at the pump surged as much as a dollar a gallon above pre–Ukraine war levels, and still isn’t back to what it was in 2019.)

While Uber is refusing to give drivers a raise, the app company has been charging customers 48 percent more for rides compared to 2019.

Many drivers emphasized Uber’s arrogance in rejecting the TLC’s ruling. This behavior by the company is consistent with the tech industry’s general attitude toward government regulation: they don’t think rules should apply to them. (Sam Bankman-Fried fooled Democrats into thinking he was different, but it turns out his narcissism in this regard surpassed what anyone could have imagined.) The rejection of government oversight goes along with the tech-bro antipathy to democracyan ideological cancer of which Peter Thiel’s dreams of authoritarian-libertarian utopia are among the more extreme symptoms.

One driver, addressing his fellow striking drivers at Uber’s headquarters on Thursday, said that if Uber did not comply with the TLC’s raise for drivers, the drivers would drive Uber out of New York City. “Should I say that again?” he asked, to cheers from the crowd. And he said it again.

Bhairavi Desaia founding organizer of the New York Taxi Workers Alliance, told the drivers that it was significant that Uber had been forced to acknowledge that there were fewer cars and drivers available today than usual. “We’re stronger than ever,” chanted the crowd. Barry noted that the turnout was much bigger than during the last strike. Regardless of what the court decides, everyone agreed, the drivers would keep fighting until they got the raise they deserve.

LUBBOCK, Texas – Kristine Blazevica finished as the 2023 Texas Tech Multi pentathlon runner-up with a score of 4,224 points in her...
Read more
Technology